More And More Women Are Starting Businesses. Why Is That So Surprising? 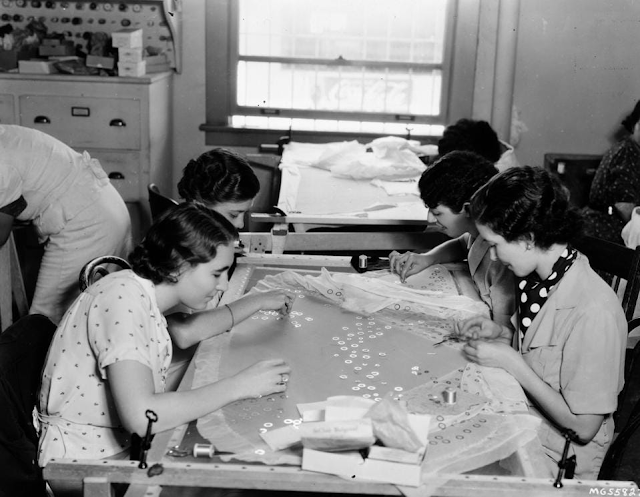 circa 1936: Seamstresses working on a dress to be worn by Greta Garbo in the MGM film 'Camille'. ... [+] GETTY IMAGES
It’s no secret that the pandemic’s economic toll has fallen disproportionately and overwhelmingly on women, millions of whom have left the job market over the last year and a half. That brings our level of participation in the workforce to its lowest in decades, and as yet, it’s not clear if women will return, or even be able to; historically, women are more likely to be hired when the hiring manager is a woman, and the exodus from the workforce includes managerial workers, too. Fewer women in the position to hire simply means fewer women getting hired.

Since the beginning of this pandemic, and even going further back, this author’s position has been that women’s financial futures depend on entrepreneurship, rather than the selling of our labor, eliminating one of the biggest barriers to our full participation in the economy. And more and more women are reaching the same conclusion; between 2007 and 2019, even before the pandemic, women started businesses at five times the national average, and women-owned businesses generated $1.6 trillion in revenue each year. And since March of 2020—you know, when the world shut down—women have started more businesses than men, and are more likely to go it alone rather than buying a stake in an existing enterprise. And while women looking to hang their shingle have to face steeper climbs to profitability and survival, especially insufficient funding, our businesses tend to outperform the national average.

None of this should be surprising. The modern workplace was developed in the initial burst of economic growth after the Second World War and was consequently designed with particular kinds of workers in mind: single men, married men with wives to take care of their homes and children, and young, single women to work in the secretarial pool. The whole (pre-pandemic) culture of business was built on that assumption. It’s why so many business discussions are held over drinks long after five o’clock, or why so many businesses equate “promotable” with “stays late at the office.” Those are conditions which women, on a structural level, are simply less likely to be able to meet while also performing their expected home and childcare duties on the infamous “second shift.” In short, the culture of professional work is not designed for women to succeed, and those same assumptions about where women belong helped fuel our mass push out of the workforce.

With all of that nonsense out there, it’s not surprising that more and more women, and especially women of color, have turned to entrepreneurship to build not only their careers and maybe even fortunes, but to simply create the conditions in which they and their families can thrive. The usual term is “work-life balance,” but perhaps it would be better to think of the goal as space for success. That means flexibility. It means working on your own terms. And, critically, it means controlling your own life rather than bending it to fit into a shape devised decades ago for people living under very different circumstances.

It may surprise you to learn that women’s isolation from the economy is a relatively recent development. If you go back to the very beginnings of the United States, or what historians call “the Early Republic,” you find the household as the basic unit of economic activity. Most families operated subsistence farms, with extra produce being used for bartering with neighbors for the things they couldn’t produce themselves or taking to market to sell for currency, or scrip. Women were the ones who spent their days weaving or sewing or quilting or making pins, turning raw materials into finished, marketable goods.
When industrialization came, it came in the form of textile production. Soon, companies were contracting women, as independent entrepreneurs, to turn mass-produced textiles into marketable clothing. It wasn’t until mass industrialization in the latter half of the 19th century and all its attendant dangers that women began to recede from the formal workforce, and even then, it was only those wealthy enough to do so, and the vast majority of women appear to have continued to engage in economically productive work. Our disappearance from the scene really only came after the Second World War, and lasted for only a single generation.

In short, women have always found ways to exist in the economy, and our spirit of entrepreneurialism is hardcoded in our history. Whether as spinners or weavers, seamstresses or pin makers, women working out of the home and generating real household income has been the historical norm. Because it is there, and seemingly only there, we get to thrive on our own terms.

Raise a glass, gals, to your grandmothers and great-grandmothers and great-great-grandmothers, your spinster aunts and their street-hawker cousins. In their own way, every one of them was a titan of industry. My hope, and belief, is that by following in their footsteps, we can push ever closer to real equality and liberation through our hard-fought economic independence.
Posted by Soledad Tanner Consulting at 2:23 PM