Jaime Nebot Saadi, Mayor of the City of Guayaquil, Extends their Sense of Solidarity with the City of Houston for the Devastation Caused by Hurricane Harvey

Houston Guayaquil Sister City Association, represented by Luis Moyano and Soledad Tanner, President and Vice-President of the organization, handed the letter of solidarity over to Mr. Harry Gee, President of Sister Cities of Houston, who will deliver, in person, the letter to Mayor Turner. Along with the letter a $500 donation will also be made to the Harvey Relief Fund established by Mayor Turner.

Guayaquil maintains a close bond of cooperation and fraternity with the city of Houston, through its Sister Cities Program, manifested through the aid received by Ecuador for the victims of the earthquake that occurred on April 16, 2016.

As a token of appreciation and support, The Very Illustrious Municipality of Guayaquil has included the Red Cross link http://www.redcross.org/cruz-roja in its official web page and social networks to redirect through its institution any possible donations to the victims of hurricane Harvey.

Guayaquil is Ecuador’s largest city; it is also the country’s leading port, an economic powerhouse, a growing tourism destination and a model for sustainable urban development. Under the leadership of its forward-thinking Mayor, Jaime Nebot Saadi, who came to office in 2000, the city has made spectacular progress over the last two decades and now ranks as one of Latin America’s rising stars.

Mayor of Houston, Sylvester Turner, acknowledges Mayor of Guayaquil, Jaime Nebot's words of encouragement toward Houston due to the devastation caused by Hurricane Harvey. 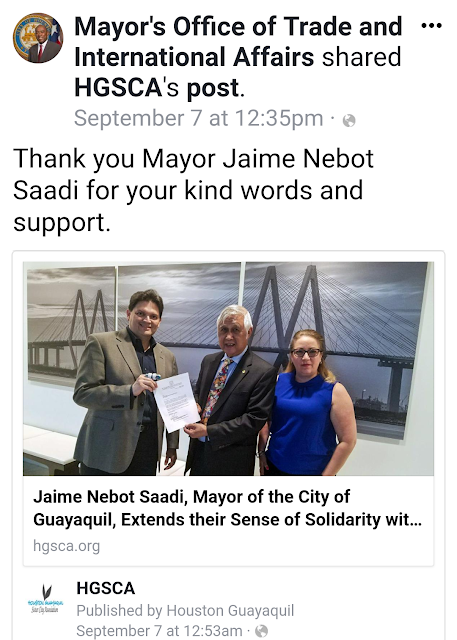