Is a Pandemic the Right Time to Start a Business? It Just Might Be 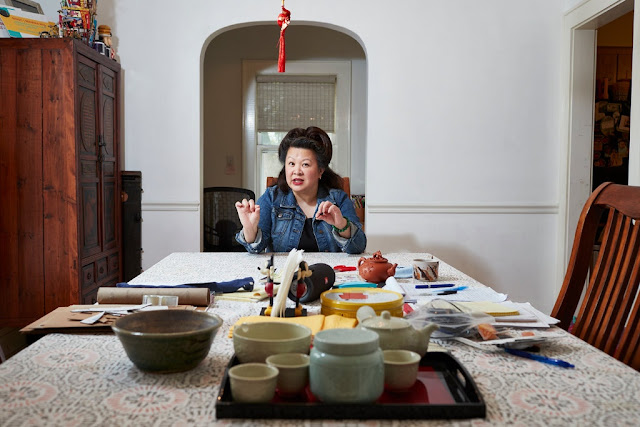 Ngoc Huynh, who is planning to open a Vietnamese food stall at Salt City Market, said its entrepreneurs were helping one another.Credit...Mustafa Hussain for The New York Times

“Downturns or challenging times are seen as good times to start a business for two reasons,” said Rashmi Menon, entrepreneur in residence at the University of Michigan’s Zell Lurie Institute for Entrepreneurial Studies. “One is, there is less competition for resources. The second reason is that whatever changes we face, positive or negative, bring up new customer needs. And customer needs are at the core of any business.”

In March, as small businesses across the country were shutting down amid the spreading coronavirus pandemic, Shanel Fields was about to open one up.

For Ms. Fields, the timing couldn’t have been better. Her company, MD Ally, allows 911 dispatchers and other responders to route nonemergency calls and patients to virtual doctors, to help local governments improve their emergency response systems.

“Something that a lot of people don’t know is that more than half of calls that go to 911 are nonemergency,” said Ms. Fields, whose father’s experiences as a volunteer emergency medical worker sparked the idea. “Those nonemergency calls overcrowd E.R.s and delay ambulances.”

But she also recognizes how crazy it sounds to start a business during an economic collapse. She knows that while she’s hiring, many small businesses are worrying about whether they’ll ever reopen.

She’s not alone: New businesses are forming despite the pandemic, though at a significantly slower rate than before.

There have been more than 500,000 applications for an employer identification number since mid-March, according to the Census Bureau, although that is down nearly 20 percent from a year ago. Between mid-March and mid-April, the Small Business Administration issued nearly 300 start-up loans worth about $153 million, a 36 percent drop from year earlier. Stripe, the credit card processing firm, said it had handled more than $1 billion in sales for businesses that started on the platform during that time.

For Ms. Fields, opening now meant greater access to top talent. She hired her fourth employee and said more than 200 qualified applicants had submitted résumés. And being in the health care sector during a pandemic has raised her profile with funders and governments: MD Ally, which is based in Philadelphia, recently signed its first customer and closed its first round of investment worth $1 million.

For others, the timing can mean low interest rates for borrowing start-up capital, cheaper equipment as businesses sell off inventory or lower lease rates as landlords scramble to fill empty spaces.

“I’m already seeing a huge uptick in requests for kitchen leases and subleases to be used for carryout kitchens or production spaces,” said Jenn Smith, a commercial real estate agent in Detroit.

In the best of times, 20 percent of new businesses don’t survive their first year, according to federal statistics; economic headwinds present greater challenges. A restaurant or bookstore opening on Main Street, however, faces very different risks from those of a new tech firm whose employees can work from home and whose customers don’t need to gather.


Determining what customers need now, rather than before the pandemic, is crucial. Ms. Menon and Mr. Brown see opportunity in offering solutions to the challenges that people now face: educating their children, working from home, managing supply chains, getting a haircut or the house cleaned, seeing doctors and therapists, entertaining themselves. Even new restaurants might be successful if they consider the future of customer service rather than recreate old systems.

“If you can find innovative ways for people to feed themselves right now, that might make sense,” Ms. Menon said. “You just have to address a need.”

Figuring out how to open the food hall of the future is the task facing Maarten Jacobs, the director of community prosperity at the Allyn Family Foundation, a regional philanthropic organization in Syracuse, N.Y.


That’s not a role Mr. Jacobs expected, considering his background is in community and economic development. He is overseeing the foundation’s investment in a new four-story, 80,000-square-foot building designed to be a community gathering space and incubator for the city’s small food entrepreneurs. A mix of apartments and nonprofit offices is planned for the upper floors, but the heart of the project is Salt City Market, which will feature food stalls run by women and entrepreneurs of color, a coffee shop and a cooperative grocery store.

The project is scheduled to open in November, so Mr. Jacobs is focused on finding the safest way to open a 24,000-square-foot market even as the world is questioning when — and how — people will want to gather again.

He’s looking at global trends on how restaurants are opening and the safety precautions being put in place to see what he might do in Syracuse this fall. He’s considering foot-operated doors, mobile sanitation stations and a new furniture concept.

“In the past, we just wanted to make sure furniture looked cool; now it has to look cool and be built like a tank and stand up to robust cleaning,” he said.

But his biggest worry is the entrepreneurs. He doesn’t want to set them up for failure.

The foundation supported Salt City Market as a way to foster entrepreneurs who might not have the resources to open their own restaurant. It hosted a community competition to identify eight small food businesses for the market. The winners received months of technical training on everything from marketing to inventory management, as well as the promise of a commercial kitchen stall with all the equipment they need. Chefs are responsible for their own signage and small goods, like plates and napkins, as well as a start-up investment of $30,000.

“We wanted a loan that if everything goes sideways, they aren’t crippled,” Mr. Jacobs said.

But everything has gone sideways. So Mr. Jacobs wants to open in a way that ensures they can succeed. “We don’t want to jeopardize them,” he said.


So far, all eight chefs plan to move forward. But several face the hard choice of leaving their day jobs to pursue their dreams, which may have seemed romantic in normal times but is terrifying in a severe downturn.

Chef Ngoc Huynh said she was scared but still excited to open her Vietnamese kitchen in the market.
“I like to be optimistic and hope for the best,” Ms. Huynh said.

She knows the challenges of restaurant life from watching her mother and aunt run a small food and catering business while working other full-time jobs. But Ms. Huynh is reassured by the fact that she’s not doing this alone. She and the other chefs are receiving technical support from the foundation and collaborating on ways to open a restaurant in a socially distant world. The group is considering new menus and hiring delivery drivers to serve all the stalls.


“We’re thinking about this together,” Ms. Huynh said. “That’s the beauty of it. We’re all competitors, but there is a network of support.”