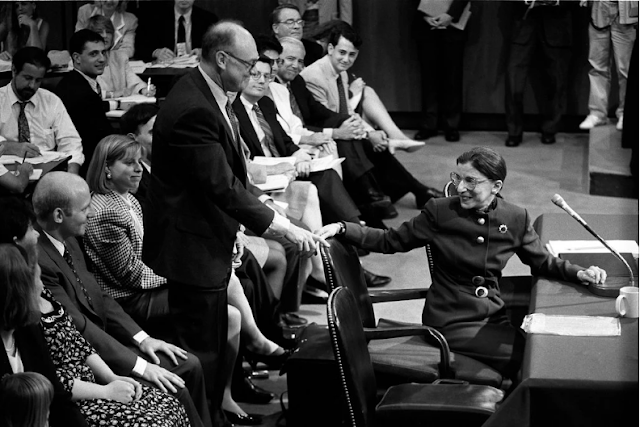 “Did you always want to be a judge” or, more exorbitantly, “a Supreme Court justice?” Schoolchildren visiting me at the court, as they do at least weekly, ask that question more than any other. It is a sign of huge progress made. To today’s youth, judgeship as an aspiration for a girl is not at all outlandish. Contrast the ancient days, the fall of 1956, when I entered law school. Women accounted for less than 3 percent of the legal profession in the United States, and only one woman had ever served on a federal appellate court.

Today about half the nation’s law students and more than one-third of our federal judges are women, including three of the justices seated on the United States Supreme Court bench. Women hold more than 30 percent of law school deanships in the United States and serve as general counsel to 24 percent of Fortune 500 companies. In my long life, I have seen great changes.

How fortunate I was to be alive and a lawyer when, for the first time in United States history, it became possible to urge, successfully, before legislatures and courts, the equal-citizenship stature of women and men as a fundamental constitutional principle. Feminists, caring men among them, had sought just that for generations. Until the late 1960s, however, society was not prepared to heed their plea.

What enabled me to take part in the effort to free our daughters and sons to achieve whatever their talents equipped them to accomplish, with no artificial barriers blocking their way? First, a mother who, by her example, made reading a delight and counseled me constantly to “be independent,” able to fend for myself, whatever fortune might have in store for me.Second, teachers who influenced or encouraged me in my growing-up years. At Cornell University, my professor of European literature, Vladimir Nabokov, changed the way I read and the way I write. Words could paint pictures, I learned from him. Choosing the right word, and the right word order, he illustrated, could make an enormous difference in conveying an image or an idea.

At Columbia Law School, my professor of constitutional law and federal courts, Gerald Gunther, was determined to place me in a federal court clerkship, despite what was then viewed as a grave impediment: On graduation, I was the mother of a 4-year-old child. After heroic efforts, Professor Gunther succeeded in that mission.

Another often-asked question when I speak in public: “Do you have some good advice you might share with us?” Yes, I do. It comes from my savvy mother-in-law, advice she gave me on my wedding day. “In every good marriage,” she counseled, “it helps sometimes to be a little deaf.” I have followed that advice assiduously, and not only at home through 56 years of a marital partnership nonpareil. I have employed it as well in every workplace, including the Supreme Court. When a thoughtless or unkind word is spoken, best tune out. Reacting in anger or annoyance will not advance one’s ability to persuade.

Advice from my father-in-law has also served me well. He gave it during my gap years, 1954 to ‘56, when my husband, Marty, was fulfilling his obligation to the Army as an artillery officer at Fort Sill, Okla. By the end of 1954, my pregnancy was confirmed. We looked forward to becoming three in July 1955, but I worried about starting law school the next year with an infant to care for. Father’s advice: “Ruth, if you don’t want to start law school, you have a good reason to resist the undertaking. No one will think the less of you if you make that choice. But if you really want to study law, you will stop worrying and find a way to manage child and school.” And so Marty and I did, by engaging a nanny on school days from 8 a.m. until 4 p.m.

Work-life balance was a term not yet coined in the years my children were young; it is aptly descriptive of the time distribution I experienced. My success in law school, I have no doubt, was in large measure because of baby Jane. I attended classes and studied diligently until 4 in the afternoon; the next hours were Jane’s time, spent at the park, playing silly games or singing funny songs, reading picture books and A. A. Milne poems, and bathing and feeding her. After Jane’s bedtime, I returned to the law books with renewed will. Each part of my life provided respite from the other and gave me a sense of proportion that classmates trained only on law studies lacked.

I have had more than a little bit of luck in life, but nothing equals in magnitude my marriage to Martin D. Ginsburg. I do not have words adequate to describe my supersmart, exuberant, ever-loving spouse. Early on in our marriage, it became clear to him that cooking was not my strong suit. To the eternal appreciation of our food-loving children (we became four in 1965, when our son, James, was born), Marty made the kitchen his domain and became chef supreme in our home.

Marty coached me through the birth of our son, he was the first reader and critic of articles, speeches and briefs I drafted, and he was at my side constantly, in and out of the hospital, during two long bouts with cancer. And I betray no secret in reporting that, without him, I would not have gained a seat on the Supreme Court.

That “everything” included gaining the unqualified support of my home state senator Daniel Patrick Moynihan and enlisting the aid of many members of the legal academy and practicing bar familiar with work I had done. 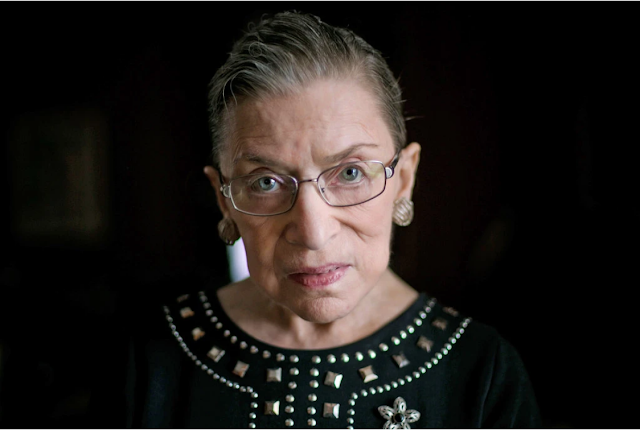 Supreme Court Justice Ruth Bader Ginsburg in her chambers on Friday, August 23, 2013.Credit...Todd Heisler/The New York Times
I have several times said that the office I hold, now for more than 23 years, is the best and most consuming job a lawyer anywhere could have.

The court’s main trust is to repair fractures in federal law. Because the court grants review dominantly when other jurists have divided on the meaning of a statutory or constitutional prescription, the questions we take up are rarely easy; they seldom have indubitably right answers. Yet by reasoning together at our conferences and, with more depth and precision, through circulation of, and responses to, draft opinions, we ultimately agree far more often than we divide sharply.

When a justice is of the firm view that the majority got it wrong, she is free to say so in dissent. I take advantage of that prerogative, when I think it important, as do my colleagues.

Despite our strong disagreements on cardinal issues — think, for example, of controls on political campaign spending, affirmative action, access to abortion — we genuinely respect one another, even enjoy one another’s company.

Collegiality is crucial to the success of our mission. We could not do the job the Constitution assigns to us if we didn’t — to use one of Justice Antonin Scalia’s favorite expressions — “get over it!”

Earlier, I spoke of great changes I have seen in women’s occupations. Yet one must acknowledge the still bleak part of the picture. Most people in poverty in the United States and the world over are women and children, women’s earnings here and abroad trail the earnings of men with comparable education and experience, our workplaces do not adequately accommodate the demands of childbearing and child rearing, and we have yet to devise effective ways to ward off sexual harassment at work and domestic violence in our homes. I am optimistic, however, that movement toward enlistment of the talent of all who compose “We, the people,” will continue.

Ruth Bader Ginsburg, who has served as an associate justice of the Supreme Court of the United States since 1993, is the author, with Mary Hartnett and Wendy W. Williams, of the forthcoming book “My Own Words,” from which this essay is adapted.
Posted by Soledad Tanner Consulting at 8:37 AM

Email ThisBlogThis!Share to TwitterShare to FacebookShare to Pinterest
Labels: leadership