We need more women in the C-suite. It won't happen on its own. 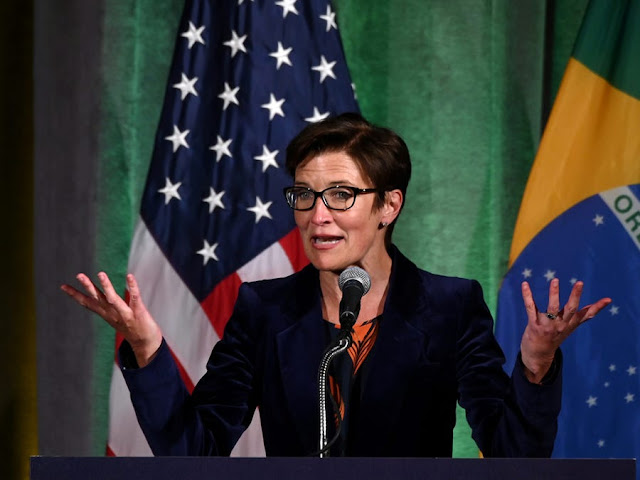 Jane Fraser addresses Brazil-US Business Council forum in Washington, DC in March 2019.  Erin Scott/Reuters
Fraser will be the first woman to lead a major US bank.

Her promotion is a symbolic step up for women across industries, and not only in finance. Just 6% of CEOs at S&P 500 companies are women, according to the research and strategy development nonprofit Catalyst.

There's no single, direct path to shattering the proverbial glass ceiling. But one thing's for sure: Women won't wind up in the C-suite by chance. Organizations need to be deliberate about addressing the systemic gender biases that preclude women from advancing in their careers.
Welcome to Gender at Work.
This is a twice-monthly newsletter that takes an expansive look at how your gender identity informs your career. Last week we explored the unique challenges that BIPOC women have faced during the pandemic. This week we're talking about ways to cultivate gender diversity in leadership roles.

We won't promise to cover every single strategy. But we've outlined some of the most pressing below.
Direct women to jobs where they manage profit-and-loss
Among Fraser's previous roles at Citigroup: running the bank's strategy division during the financial crisis and steering the bank's Latin America division through several crises.

It's crucial for women leaders to gain experience that involves managing a business' profit-and-loss. Earlier this year, The Wall Street Journal published an analysis of executives at the biggest public companies and found that men were more likely than women to get these jobs, which directly affect the bottom line. The people who hold these positions are better positioned to eventually be CEO.

The Journal analysis found that women often get funneled into different tracks, like human resources and legal. These functions are important to a business' performance, but typically don't lead to the CEO job.

Be aware of implicit biases

Implicit biases are the unconscious stereotypes or assumptions that people can hold about others. For example, "an effective senior banker is (wrongly) imagined to be aggressive, dominating, transactional," Astrid Jaekel and Elizabeth St-Onge, partners at management consulting firm Oliver Wyman, wrote in The Harvard Business Review in 2016. These characteristics "are stereotypically masculine," they add.

People who hold these assumptions might feel that a woman isn't "management material," simply because they feel more comfortable with the image of a man in charge.

"Firms are more willing to take risks on men. With a woman, she has to prove it first," one senior woman in finance told The Harvard Business Review.

Our colleague Marguerite Ward reported that women and BIPOC often feel the need to change the way they look, act, and speak in order to fit in with the existing workplace culture.


So it's critical for managers to be aware of how those biases can show up. Leadership might provide training sessions on what to look out for and how to establish inclusive hiring and promotion practices. Professional-services firm PwC, for example, is using virtual reality to simulate office scenarios in which employees have to decide who to hire and promote, Business Insider previously reported.

Ideally, companies would be intrinsically motivated to develop inclusive hiring and promotion practices. But they aren't always. So it helps to have a little external pressure.

Fraser's promotion to her current role — president of Citigroup and CEO of Global Consumer Banking — happened shortly after the head honchos on Wall Street were called out for their (white) boys' club culture.

At a congressional hearing in April 2019, Democratic Rep. Al Green asked the CEOs of some of the largest banks, including Citigroup, whether they believed that their likely successor would be a woman or a person of color. No one raised their hand.

JPMorgan also took action, promoting a record number of women to managing director in April 2019 (26% of the group, or 30 executives, were women).

Focus on the first promotion gap
According to a 2018 McKinsey study, 8% of women in early-tenure jobs are promoted, while 10% of men are.

But that first promotion gap leads to a smaller talent pool of candidates for executive leadership later on. Researchers refer to the lack of promotion opportunities for women, and especially BIPOC women, as the "broken rung."

Facebook COO Sheryl Sandberg said that diversity and inclusion efforts can't be effective if promotion efforts are concentrated at the top.

"A lot of companies' programs and a lot of diversity efforts are focused at the top — how do we develop senior leaders? And that's super-important. But what we also have to focus on is what we call 'the broken rung,' that first broken rung from employee to manager," Sandberg previously told Ward.

Bridging the gender gap that first promotion is a key way to help women reach the C-suite.
Change needs to happen at home, too

We should note: These are all structural changes organizations can make in order to promote gender diversity in leadership. But women need support networks at home, too, in order to advance professionally.

Axios' Felix Salmon and Erica Pandey reported that Fraser's husband left his job as head of global banking at European bank Dresdner Kleinwort in order to help Fraser advance in her career.

Still, managing work and family was hardly a breeze. Axios reported that Fraser worked part-time at McKinsey while her two kids were young. She'd often do her work in the kitchen at 3 a.m.
Posted by Soledad Tanner Consulting at 8:22 AM

Email ThisBlogThis!Share to TwitterShare to FacebookShare to Pinterest
Labels: CEO