The Most Common Practices Of Super-Achievers 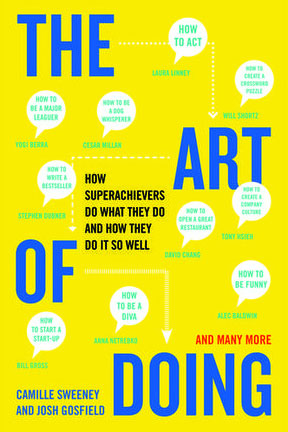 How Super-Achievers Do What They Do

For their new book The Art of Doing, Camille Sweeney and Josh Gosfield interviewed 36 super-achievers at the tops of their fields. They started seeing patterns emerge. These are the 10 most common practices of the highly successful.

Co-authors Sweeney and Gosfield heard again and again the importance of patience–whether it’s strategically waiting for the best time to take action or continuing to pursue a larger vision without receiving immediate rewards. Jill Tarter, director of SETI research, has been searching for life on other planets for the last 50 years without any guarantee of success.

Super-achievers know how to manage their own emotions and those of the people around them. Gary Noesner, former FBI hostage negotiator, would listen and find out what the person’s needs were in order to gain their trust and diffuse the intense emotions.

Successful people maintain success by consistently learning and adapting to the environment around them. Tennis champion Martina Navratilova realized this when her game suddenly started sliding. She decided to transform her training routine and diet, and soon was back on track to become an all-star athlete.

Success cannot be achieved alone. Achievers galvanize a group of people around their idea or goal. Jessica Watson, who sailed around the world at age 16, sought the help of mentors, experts and friends to support and prepare her for the journey.

5. Testing Ideas In The Market

“Everybody has a bias to think their own idea is brilliant,” says co-author Gosfield. “[Achievers] roll it out in an environment that’s as close as possible to the market.” Bill Gross, the head of Idealab and a mega-successful entrepreneur, always tests his business ideas first to better understand consumer interest before he launches them.

Super-achievers are intelligently persistent—meaning they know when to pivot. When faced with setbacks, instead of doggedly using the same tactics that aren’t working, they examine the problem and figure out what will work. Opera superstar Anna Netrebko was initially discouraged from being a solo singer. However, she took a job as an opera-house janitor, got the chance to audition and eventually got a shot at the lead role.

Success fuels happiness, and happiness in turn fuels greater success. Game show champion Ken Jennings said his passion for the game helped him win, and every win gave him more confidence for the next round.

Successful people practice the art of listening to learn what they need to know about the world around them. They may listen in the tradition sense, but it’s also about being open more generally. Actress Laura Linney does this with every script. She never takes a part unless she has read and reread the script so many times that it has opened up to her.

9. Dedication To A Vision

Super-achievers are dedicated to their vision day in and day out. Philippe Petit, famous for his high-wire walk between New York City’s Twin Towers, dedicated himself to the feat before he was even an accomplished wire-walker. He stuck with it until he’d accomplished his goal.

Stories have the ability to transport people to your world, so they’re more likely to invest in you and your brand. Instead of million-dollar ads, Zappos.com CEO Tony Hsieh wanted each customer interaction to sell the brand. With positive word of mouth, every customer was telling the story of the company.
Posted by Soledad Tanner Consulting at 1:48 PM