The gender gap has been a hot topic in Japan for some time. The country has performed poorly in the World Economic Forum’s Global Gender Gap report, ranking at just 111th place in the 2016 edition, while a Gender Parity task force is working on closing the gap.

The Abe administration has made a variety of efforts on the policy side, including an increased budget for childcare facilities. Recently, slogans like “work-style reform” and “same pay for same work” have targeted the culture of long working hours and the distinction between “permanent” and “non-permanent” employees, many of whom are women. 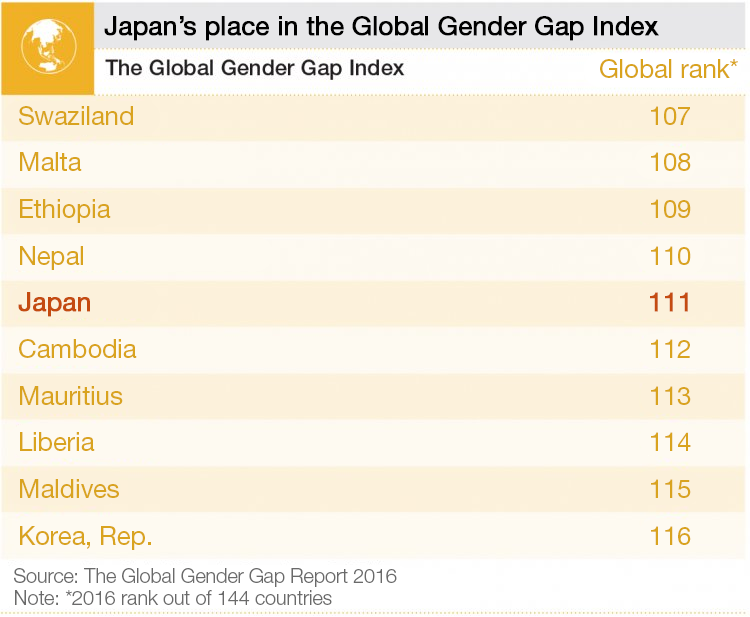 Meanwhile, the private sector has promoted women to leadership positions, increasing the ratio of women with managerial positions, while “diversity” has become a buzzword in both the public and private sectors.

Yet the challenges remain urgent in Japan, especially in the broader context of rapid aging and a sharply declining working population. We need to take a long-term view when we consider the systematic impact of the Fourth Industrial Revolution on employment, as technologies such as robotics and AI change the nature of work for both men and women. Specifically, administrative, retail sales and production jobs are likely to be replaced by automation. However, few address the issue that many of the replaceable jobs are filled by women, and recently, by the elderly.
"It starts at a young age"

The gender gap cannot be tackled in a silo. Rather, it is part of a system of interrelated trends in demographics, work and technology.

I propose a shift away from the rigid, outdated mould that divides life into three stages - education, work and retirement - and towards a much more flexible and adaptive approach. Instead of passively moving from one stage to the next, people should be able to actively decide when and how they join the labour market.

Japan currently has a very detailed and prescriptive three-stage mould, hampering women’s ability to return to work after having children and harming the financial prospects of the retired. The corporate HR system, the government social security system and insurance policies all hinge on the study-work-retire lifestyle, representing substantial barriers to any departure from the norm.

Though Japan is not the only county with this notion, it is unique in that each stage is further divided into smaller stages and they are so rigid. It starts at a young age. After high school, you are supposed to go to college. After college, you are expected to join “the company”. Recruiting is still done at certain time of the year and if you cannot get the “right” job (a full-time role at an established company), you are labeled as a “loser” and your doomed career is difficult to recover.

Once you join the company, you follow a fixed path with your cohorts, and few fast-tracks are available. As the labour market is not well developed, many people working for the large established companies are likely to stay with the same company until they retire. The retirement age has been extended from 60 to 65, partly because the pension system is almost bankrupt and life expectancy is very high, at 83 years. But there’s a lack of initiatives to re-skill older workers and help them to live well.

The rigid, three-stage model fails to take advantage of the way technology has opened up more flexible ways of working, which would help people to strike a better work-life balance and handle their caring responsibilities. While some multinationals and leading Japanese companies, including Toyota and Nissan, are beginning to allow work from home, an outmoded culture of strict presenteeism still prevails. This harms anyone with caring responsibilities, whether for children or for elderly relatives.

There are five things we can do to disrupt the model and address the interrelated issues of gender, work and education.

1. Make work flexible to accommodate the needs of the time
Technology enables people to work from anywhere at any time. Rather than coming to the office at certain time in crowded trains and staying long hours just to keep face time in front of the boss, parents can take time to care for their children and/or the elderly members of the family. The technology has long been there to make this possible; we now need a shift in working culture.

2. Encourage the lifelong learning of new skills
When a flexible work style is adopted, individuals, regardless of age, gender and background, can continue learning new skills and acquiring knowledge when needed. They can apply these skills to projects offered by companies, instead of following rigid full-time jobs. They can make use of the expertise they build up across various projects, without having to find a single “right” job. Each one of us should be able to design own career and lifestyle so that they are fit for purpose at any given time.

3. Make recruitment more flexible
Companies can benefit from this ecosystem by recruiting people with skills and knowledge they need for certain projects from a much bigger market, on a global scale, without worrying about long-term commitments to full-time employees.

4. Make space for trial and error
Change on this scale requires a series of experiments and a trial-and-error approach. Companies need to develop the capacity to define tasks and projects, and to evaluate the output by their own criteria. Individuals need to learn how to manage their time and cultivate self-discipline to deliver work on time. Face-to-face contact, critical for ideas and prototyping, may need to be designed in.

5. Find the right policies
The social security system and government policies need to undergo change, to accommodate and monitor these new ways of employment and to fund life-long learning.

It will be a major undertaking, where the public and private sectors transform themselves and individuals take control of their careers and lifestyle. This is no easy task for an economy built around the three-stage approach to life. However, rising life expectancy is a reality we cannot ignore. I am hopeful that Japan, which has demonstrated resilience in the face of difficulties, can and should start the journey now.
Posted by Soledad Tanner Consulting at 1:28 PM